skip to main | skip to sidebar

Deb66 has started a new forum for those of us who are researching Crolla Family history. It's somewhere you can post queries or exchange info. Get over there - REGISTER - and leave a message RIGHT NOW!
Posted by Mrs Crolla at 12:03 am 1 comment:

Check out the new Crolla Family Tree website here.
If you have photos of the family, send them for inclusion in the albums.
If you use genealogy software on your pc, send a gedcom file with any missing parts. I have!
Let's create a really comprehensive Crolla Family Tree we can all share.
Posted by Mrs Crolla at 11:33 am 1 comment:

The Daily Mail has just published a new story about the Crolla family breast cancer gene. Read about it here. http://www.dailymail.co.uk/pages/live/articles/health/healthmain.html?in_article_id=468871&in_page_id=1774#StartComments

It seems to me that the NHS are astonishingly slow to catch on to all the research we are all doing into the family. My husband took them the entire family tree as we know it (on cd) when he went for his first visit to Nottingham City Hospital genetics department. This was six months or so ago. They only called him back in for a blood test again this week. They said they could not trace the records of his first cousin who died from breast cancer 23 years ago. What's going on?
Posted by Mrs Crolla at 8:36 pm 7 comments:

Go to spinning the web to find WW1 Crolla
Just type crolla in the search engine, to see Crolla come up on the National Roll of Honour

I have today received some information we've all been looking for! A contact in Belgium, Michel Vacca has sent me an extensive tree for the Crollas in Picinisco. Believe me, this takes us way beyond the "holy grail" of the parents of Antonio and Felis. I haven't even replied to his email yet, and so for the moment, a taster:
Antonio Cesario Crolla [b 1/05/1830] m [20.07/1858] Felicita Pia
Posted by Mrs Crolla at 4:33 pm 2 comments:

Antony Crolla, his sons and grandson 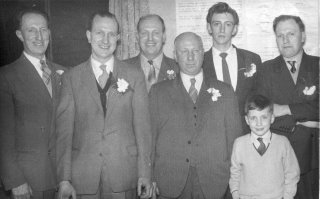 Getting info about Crolla Ancestors

You can have a look at the Crollas I have recorded in my family tree at
http://www.gencircles.com/users/kath_crolla
There are lots of people with more info than me, though.
Many people are in touch through
http://www.genesreunited.co.uk
and
http://ancoatslittleitaly.com
is interesting for background
Posted by Mrs Crolla at 2:44 pm No comments:

Brief History of the family

The article in the Daily Mail says that the brothers came to Manchester from Italy in 1882. In fact we now know that it was their parents, Antonio and Felis, who came, and in the 1870s. They appear in the 1881 census, but not the 1871. They are listed as living in Blossom Street, Ancoats, in 1881, with Antonio a lodging house keeper. They had four sons and two daughters between 1861 and 1874: Vittorio, Eugenio, Gerardo, Gaetano, Maria and Johanna, all born in Italy. This actually tells us they came after 1874, when Johanna (Giovanna) was born. All became ice cream vendors and street musicians in Little Italy. Recently Linda Imeson has discovered that Antonio and Felis are buried in St Joseph's Cemetery in Moston- but I hope she'll post about that herself.
Posted by Mrs Crolla at 2:30 pm No comments:

The Breast Cancer Gene & the Crollas 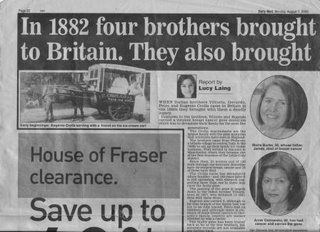 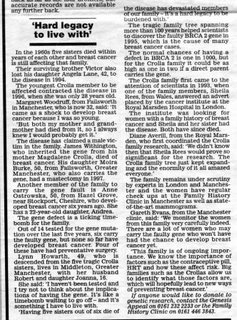 One of the reasons why many people started doing the family research was because of this 2000 article in the Daily Mail*. It seems there is a breast cancer gene in the family which has resulted in the loss of many members, male and female. If you're a direct descendant it's obviously a good idea to get checked out.
Gareth Evans of the Genetics Department at St Mary's Hospital is now on 0161 276 6206, ask for his secretary Maggie. We were told that you need a referral from your GP and then on to your local hospital. Better safe than sorry.

* Daily Mail. Monday. August 7. 2000
In 1882 four brothers brought their ice cream making skills to Britain. They also brought a catastrophic cancer gene.
Report by Lucy Laing
WHEN Italian brothers Vittorio, Gerardo, Petro and Eugenio Crolla came to Britain in the 1880s they brought with them a deadly legacy. Unknown to the brothers, Vittorio and Eugenio carried a virulent breast cancer gene mutation which was to devastate their family for the next five generations. The Crolla descendants are the largest family with the gene mutation that scientists have seen in England. The brothers came from Picinisco, a hillside village in central Italy, in the 1880s to set up their family ice cream business. They settled in Ancoats in Manchester, where they became one of the first founders of the Little Italy district. Since then, 25 women out of 120 born through the brothers’ bloodline have developed breast cancer and 18 of these have died. The Crolla curse has devastated whole families and 100 years later it is still spreading, with research suggesting more than one in three may carry the faulty gene. The passing of the gene is largely down to the eldest brother Vittorio, born in 1857, who fathered 15 children with three wives. Eugenio also carried it, although so far that branch of the family tree has yet to be fully traced. Petro had no children and although there is evidence of some breast cancers in Gerardo’s family, experts are unsure whether he was a carrier. The faulty gene has been traced back as far as the four brothers, but accurate records are not available any further back. In the 1960s five sisters died within years of each other and breast cancer is still affecting that family. The tragic family tree spanning more than 100 years helped scientists to discover the faulty BRCA 2 gene in 1995, which is the cause of many breast cancer cases. The normal chances of having a defect in BRCA 2 is one in 1000, but for the Crolla family it could be as high as one in two if a direct parent carries the gene. The Crolla family first came to the attention of scientists in 1993, when one of the family members, -----, from Wales, answered an advert placed by the cancer institute at the Royal Marsden Hospital in London. The institute was looking for women with a family history of breast cancer and both she and her sister had the disease. Both have since died. Diane Averill, from the Royal Marsden, who first coordinated the Crolla family research, said: ‘We didn’t know then that Sheila Rees would prove so significant for the research. The Crolla family tree just kept expanding and the enormity of it all amazed everyone.’ The family remains under scrutiny by experts in London and Manchester and the women have regular check ups at the Family History Clinic in Manchester as well as state- of-the-art mammograms. Gareth Evans, from the Manchester clinic, said: ‘We monitor the women from this family very carefully indeed. There are a lot of women who may carry the faulty gene who won’t have had the chance to develop breast cancer yet. ‘This family is of ongoing importance. We know the importance of factors such as the contraceptive pill, HRT and how these affect risk. Big families such as the Crollas allow us to identify what those factors are, which will hopefully lead to new ways of preventing breast cancer.’ If anyone would like to donate to genetic research, contact the Genesis Appeal on 0161 232 2233 or the Family History Clinic on 0161 446 3843.
Posted by Mrs Crolla at 12:55 pm 3 comments:

Hi all
I've set up this blog so that we can all share news about research we've been doing about the family. There seem to be so many people out there, all looking for the same info, it seemed like a good idea. See what you think!
Posted by Mrs Crolla at 12:02 pm 1 comment: